Diabetes is an incurable global killer: the World Health Organization estimates 350 million diabetics worldwide, with an average annual fatality rate close to 1%. Fortunately, modern medical science enables diabetics to manage their glucose levels and intake, so many countries have seen greatly reduced danger of the disease. Many diabetics must track their glucose levels throughout the day, requiring an accurate method for measuring the concentration of glucose in blood. For modern sensor designs, the method of choice is electrochemistry.

Diabetes management that involves drawing blood from the patient several times a day is invasive and uncomfortable, to say the least. Continuing research in electroanalysis allows measurement techniques for glucose concentration that are not only becoming faster and more accurate, but also operate on much lower volumes of blood. With the development of these methods, it is possible to decrease the discomfort of diabetes management as we know it today. 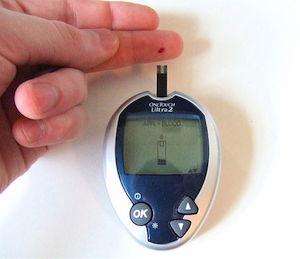 Electrochemical methods for glucose sensing are based on glucose oxidase (GOx), a biologically occurring enzyme that oxidizes the glucose molecule to gluconic acid. In nature, the oxidation is achieved by a biological oxidizing agent, such as the co-enzyme FAD+ (that co-enzyme is actually a catalyst, since it is in turn oxidized back to its starting condition by dissolved oxygen).

In an electrochemical cell, however, this oxidation can instead take place at the surface of an electrode, releasing electrons into an electrical circuit, which can be measured as a current. In a well-constructed sensor, that current will be proportional to the quantity of glucose reacted with the enzyme, and, so, to the present concentration of glucose. This concept stems from the pioneering research of the American medical scientist Leland Clark.

Because of the specificity of the biological GOx enzyme, the sensor can measure glucose concentration uniquely, even in a mixture like blood, which contains a large number of chemical compounds. Finally, this technique has been developed by the use of redox mediators that react more efficiently than oxygen itself, thus allowing a more accurate and unperturbed measurement.

Many companies around the world manufacture glucose sensors for patient use. Product development at the present time has moved beyond the proof-of-concept stage through to an effort to create a state-of-the-art product: the optimal glucose sensor, within the constraints of cost and manufacturing.

Although the principle behind an electrochemical glucose sensor is simple, its implementation can be complex. Because the sensor must work under a range of conditions, clever design is required to ensure that a measured current can still be directly correlated to the glucose concentration in the sample. Practical difficulties may include varying oxygen concentration in blood, the presence of other chemical species in the blood that react similarly to glucose, and the change in temperature of the sensor due to blood being supplied at body temperature. All of these can influence the measured electrical current in a sensor.

COMSOL Multiphysics is an ideal tool for real-world 2D and 3D problems in electroanalysis. Why? Because it’s easy to couple the electrochemistry to models of other physical effects, such as heat and mass transfer. What’s more, the ability to add user-defined variables and equations means that a detailed description of non-standard or complex phenomena, such as enzyme kinetics, can be incorporated into the model. Often, the theoretical model is developed by experimental corroboration of the behavior of the electrochemical system. Therefore, the numerical modeling approach must remain flexible.

An Example of a Glucose Sensor

You can find a simple model of a glucose sensor in the COMSOL Multiphysics Model Library. This particular model is of a sensor using an “interdigitated electrode”, in which the anode and cathode of the sensor cell are divided into a large number of “fingers” running parallel to each other, maximizing the current density and sensitivity of the system. Because the “digits” are usually much longer than they are wide, their length can be ignored and the problem can be simplified to a 2D unit cell.

This model includes the mass transport of the glucose and the redox mediators by diffusion and the fluxes of these species into and out of the system. Additionally, the enzyme-catalyzed reaction between the redox mediators and the glucose is included in the model using a user-defined Michaelis-Menten kinetic rate law (my colleague Eyal Spier explains this in his previous blog post “Enzyme Kinetics, Michaelis-Menten Mechanism“).

The figure below shows the concentration of the ferrocyanide redox mediator species when a steady-state current is drawn in the sensor. 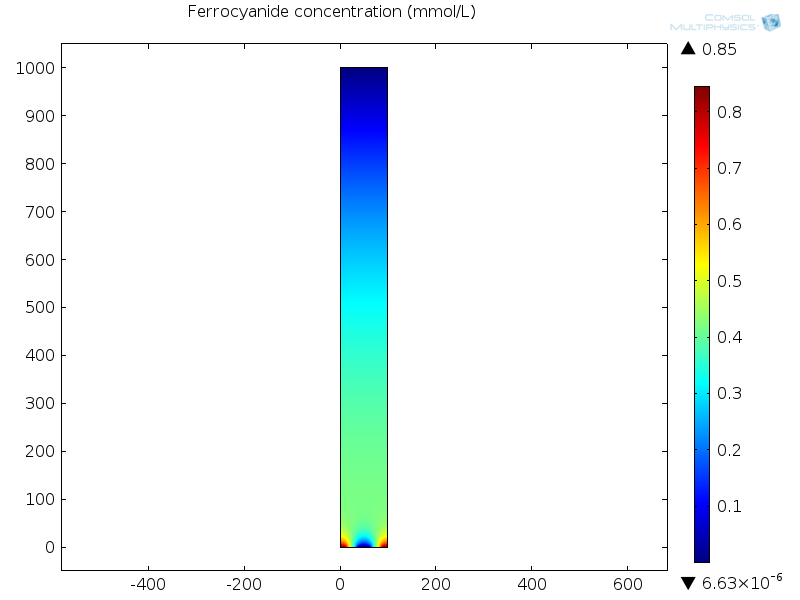 At the anode (working electrode) in the bottom center, this species is oxidized to reduce the other redox species, ferricyanide, so the concentration is depleted here. At the cathode (counter electrode) at the bottom left and right corners of the unit cell, ferrocyanide is regenerated and diffuses back towards the working electrode in a “redox cycle” that delivers high current densities. 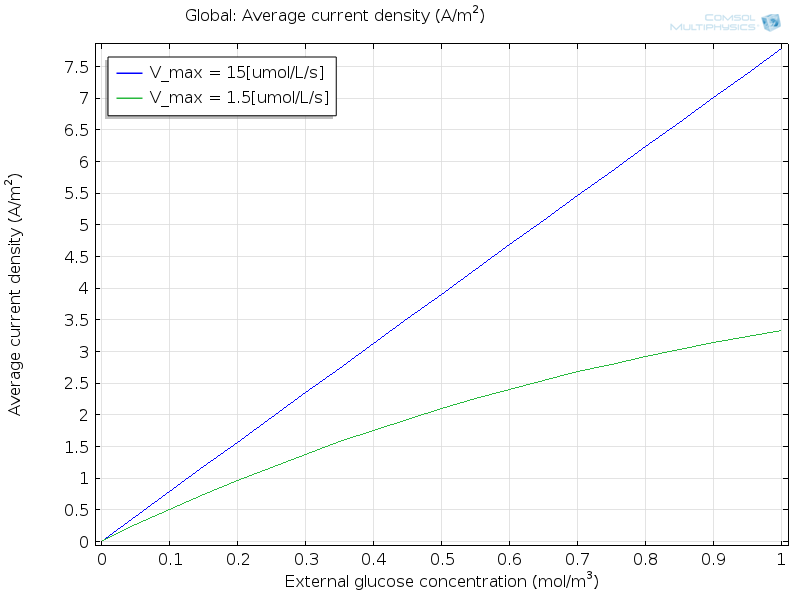 However, it’s not hard to break the sensor (green line). This is done by imagining the enzyme to be a factor of 10 slower at oxidizing the glucose itself, by lowering the v_\mathrm{max} coefficient for the enzyme kinetics. Then, the linear response fails over the same concentration range. This demonstrates the importance of careful design to ensuring that the current measured in a glucose sensor really reflects the concentration present. You may wish to try your own variations on the model to see the influence of other effects.

Tip: Check out the Glucose Sensor model in the Model Gallery. 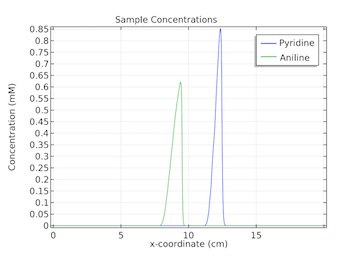 How to Model Ion-Exchange Membranes and Donnan Potentials